Chelsea midfielder Cesc Fabregas has vowed to prove critics wrong and to show them that he can still play at the highest level. The player has been under pressure in recent games for his failure to impose himself at the heart of the Chelsea midfield, and many fans and pundits have called for the player to be dropped from the first team.

Indeed with Drinkwater returning to form after being out with an injury, some pundits are calling for Antonio Conte to drop Cesc Fabregas from the team and play a central pairing of Drinkwater and Kante at the heart of midfield. END_OF_DOCUMENT_TOKEN_TO_BE_REPLACED

Everton boss Ronald Koeman is hopeful that the club’s medicine of confidence will kick in when they host Bournemouth in the Premier League this weekend. 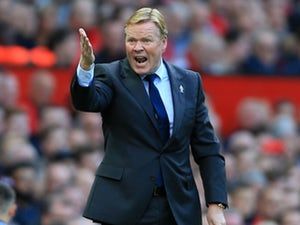 The Toffees have made a below-par start to their top-flight campaign, and this has resulted in them dropping into the relegation zone in 18th place. The Toffees have played the likes of Manchester City, Manchester United, Chelsea and Tottenham Hotspur in the span of just five games, and they could consider themselves unlucky to have received such a tough fixture list at the start of the season.

Everton secured a comfortable 3-0 triumph over Sunderland in the League Cup on Wednesday night after Dominic Calvert-Lewin scored a brace and Koeman has challenged his side to hit a similar run of form in the league starting from the game against the Cherries. He said: “Now we need to see we’re still strong. I’m confident in what I saw yesterday – that’s always the best medicine, to get the confidence you need for good performances. Good performances normally mean winning games.” END_OF_DOCUMENT_TOKEN_TO_BE_REPLACED

The sacking of Ronald Koeman and struggles of Everton

Everton have gone from finishing 7th in the English Premier League to falling into the relegation zone. With their head coach Ronald Koeman sacked on October 23 after losing 5-2 against Arsenal, they will struggke to make it into the top half of the table again this year.

Rumours and reports are being spread around in relation to which manager is going to be selected as the new coach of Everton. Sean Dyche and Sam Allardyce are some of the favorites of taking up the hot seat. Other names that have been popping up but aren’t considered to be as favorites includes the former manager of Borussia Dortmund Thomas Tuchel and the more well-known Carlo Ancelotti. END_OF_DOCUMENT_TOKEN_TO_BE_REPLACED